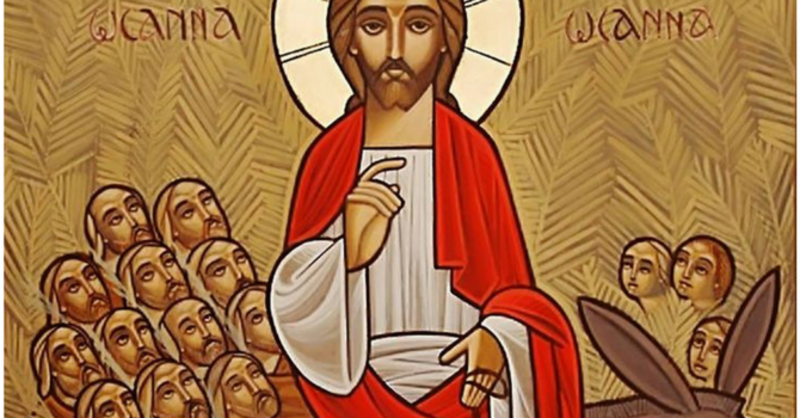 Hosanna! (Matt. 21:9; Ps. 118:25) Jesus comes to save. It’s what the Hebrew word means: save us now! It’s what our Lord was going to Jerusalem to do: to save them NOW. He was riding forth (Matt. 21:5-8) to be crowned with thorns. (Matt. 27:29) Thorns for the sin of Adam. (Gen. 3:17-18) To be pierced for our transgressions; wounded for our iniquities. (Isa. 53:5) Just as the prophecy had said that the Serpent would bite his heal when He destroyed the serpent. (Gen. 3:15) That piercing was the cost of his enthronement. He was about to save them NOW by being enthroned, exalted, lifted up on a cross. (John 3:14-15) So that by faith He would rule over all who trust in Him. He rules over you justifying by His grace and ordering all things in the universe for your salvation. (Jer. 23:5-6) When He saves you now He becomes your sovereign whose job it is to save you.

Hosanna to Him who came humble and riding on a donkey. (Matt. 21:5; Zech 9:9) For He didn’t come to be worshipped. He came to save. He came in humility. He came to cast the mighty from their thrones and lift up the humble. (Luke 1:48a, 51-53) You can only do that when you come among the humble and downtrodden as one who is humble. (Gal. 6:1) If you come to someone crushed by the weight of the world on them, crushed by weight of their own sin, crushed by life here below, you must do so gently. Humbly. For such broken, crushed people expect to be ignored. So they will ignore you. They expect to be attacked, so they avoid you, and even attack you. You can only disarm their natural defences by coming gently. Humbly. Quietly. In compassion and consideration of their suffering. Coming to save them. Hosanna.

Hosanna had become a cry for the Jews who had waited for their saviour. A saviour is the oldest cry of the human heart. For if you look at the situation of life, the circumstances that you have no control over and you can’t help but long for some one to help you, to save you.  Even if you did it to yourself and now your self-made prison is inescapable you long for a saviour. Or whether the prison you are in happened to you, like the trauma of abuse, or the pain, terror, and devastation caused by cancer, war, or disease, we find ourselves helpless and in need of a saviour. That was the Jews as a nation. They had once been great and mighty. King David was their warrior King. The anointed of the Lord. (Ps. 89:20-25) A blessed Messianic figure. Whose Son was prophesied to be One to save. (Jer. 23:5; 2 Sam. 7:12-13, 16; Ps. 132:11) One who would be pierced for our transgressions, whose foot would be struck by the Serpent, who though from a mighty royal line, would come humbly. (Matt. 21:5; Zech. 9:9) For He trusted in His God.  Faith is humble. (Jam. 4:6) So over the generations of being a land conquered by one foreign invader after another they had learned to pray: “Hosanna! Lord save us now.” They were taught patience, endurance, character, and ultimately hope by their sufferings. (Rom. 5:3-5) In their patient endurance they hoped in the Lord. They cried out to Him, “Hosanna. Save us now.” Trusting that one day He who comes in the name of Lord—the Son of David, the Lord who is salvation—would come. (Matt. 21:5; Zech. 9:9; Matt. 21:9; Ps. 118:26)

And so Hosanna was a cry of expectation. A cry unto Him who would come to save. He who would emerge from the shattered stump of King David’s royal line. (Jer. 23:5) A branch or sucker growing from the stump of David’s family tree. Just like a sucker sometimes comes up from a dead stump and can become even greater than the glorious tree which was before. For its roots, its beginnings are of old. (Mic. 5:2) They are rooted in the first promise the Lord ever gave us of salvation (Gen. 3:15): that He Himself would come to save us.

Hosanna is our prayer as we wait for Him to come again. He already came the first time to bring a New Covenant—a New Testament in His blood. Like a will it went into effect at His death (Heb. 9:15-17) and foreshadowing our glorious inheritance to come He rose. (Rom. 4:25) For He is the firstborn from the dead. (1 Cor. 15:20) When He comes again we who walk around in these dying bodies will be changed. (1 Cor. 15:51-53) In the twinkling of an eye we will be transformed. Those who have gone before us into His eternal kingdom will be raised. Their disembodied soul will be re-embodied. Made whole. For we are not souls living in a body. We are body and soul together united: a living being. (Gen. 2:7) That’s who we are. It’s our eternal destiny by faith in Him who comes to save. And just like those waiting Israelites who suffered the ravages of own sin and the ravages of the nations who dominated them, in our dying bodies we suffer the ravages of our own sins. We suffer ravages of our decaying bodies which dominate us. But we shall be free when He comes again. And so we pray, “Hosanna! Lord save us now.”

And praise God, time has drawn closer. (Rom. 13:11) We must wake up. Just as the people of Bethany and Bethphage (Mark 11:1) had been shaken from their slumber just days earlier by our Lord’s raising of Lazarus, we who believe must be waken from our spiritual slumber. (John 11:1, 38-44, preceding Palm Sunday in John 12:12-19) For the long night of His absence advances. The dawn of His coming is near. (Rom. 13:12) And so Hosanna is our prayer. For how else do you put off the works of darkness and the desires of your flesh? (Rom. 13:13-14) How else do you make no provision for the flesh, but to repent of your desires within which wage war on your soul? (Rom. 13:14; 1 Pet. 2:11) Recognize them for what they are: products of your sinful nature which bubble up within you. Things to be repented of. Turned away from. To be put off from you. (Rom. 13:12) But since they are part of you by birth, thanks be to God that He clothes you not in the rags of your sinful flesh and the works of darkness, but in the armour of light! Which is Christ Jesus Himself. (Rom. 13:14; Gal. 3:27; Isa. 61:10) His robe of righteousness, cleansed and purified by His holy precious blood shed on your behalf for your salvation. (Rev. 7:13-14) So Hosanna! Save us now from ourselves. Save us from this world and its oppression. Save us and come to us, dear Lord. Hosanna in the highest!