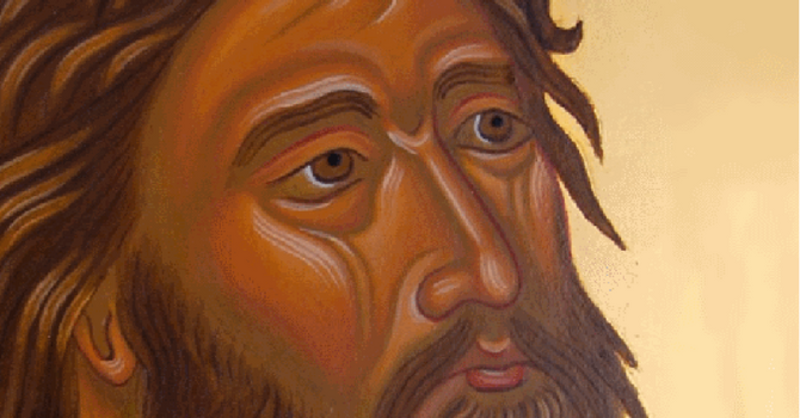 John sent to comfort God’s people. (Matt. 11:10; Isa. 40:1, 3) He would comfort them by terrifying their consciences! By reminding them they will die. (Isa. 40:6-7) They are like grass which withers in a season. It can have glorious flowers, but how long do they last? They’re gone in the blink of an eye. John was to comfort them by telling folks that you get what you deserve. That sin is vile and God detests it. (Isa. 40:2; Luke 3:7-9) So prepare the way of the Lord! Repent. Straighten yourself out. (Isa. 40:3) Be ruthless. Fill in the ditches in your life that you get stuck in them. (Isa. 40:4) Fill them up with repentance, with turning away from yourself, your desires, and smooth out the rough patches. Smooth them out with God’s grace and mercy. Be healed of your sins for God’s glory is about to be revealed in you, for the mouth of the Lord has decreed your forgiveness. (Isa. 40:5) And the Word of the Lord stands forever! (Isa. 40:8)

That’s what John sent to do before the coming of the Word of God made flesh. (John 1:1-3, 14; Isa 40:5, 8) To prepare His way into your life by calling out your sin. To lay it bare, and terrify you with it so that you repent. For everyone has issues that if Lord laid into you on it, you would be reduced to tears. “Repent you brood of vipers! Who told you to flee from coming wrath?” (Luke 3:7-9) Don’t just say the right words to look good. Change your ways. Amend your life. Turn your heart.

Now, it’d be easy to judge John. To right him off if he got in your face a little too much. If he got too close to something you love and told you to repent of that. To stop it. There’d be any manner of things you could point out with John to let yourself off the hook: “What does He know? He’s just a country bumpkin. He lives in the wilderness. (Luke 3:2-3) He’s not civilized. Not educated. He’s a crazy man shouting in wilderness. (Luke 3:7-17; Matt. 3:7-12) Wearing wild clothing. (Matt. 3:4) Baptizing people into his “cult”. (Luke 3:3) I’m too smart for that. I won’t get sucked into that. I’m ok the way I am. What does a guy who eats grasshoppers know anyway?” (Matt. 3:4; Mark 1:6)

But St. Paul tells us what we must think of guys like St. Paul and John who were sent by the Lord. We must think of them this way: as men who are servants of the Lord. (1 Cor. 4:1) Following His lead. Marching to His drum. Who are under His command. And more than that, who have had the mysteries of God—the holy Sacraments—placed into their care. Under their management. And it is not wise to judge those who are the Lord’s sent servants. (1 Cor. 4:5) The Bible says don’t bring a charge against a pastor except on basis of 2 or more witnesses. (1 Tim. 5:19; Deut. 19:15; Ps. 105:14-15; 1 Sam. 26:9) Certainly not on the basis of hearsay, nor gossip. But actual, credible, willing to say it out loud, in public by eyewitnesses. No whisper campaigns. No smear campaigns. In the light of day. Under the light of the cold hard truth. Bringing forth what is evident so that all can see it. For who are we to judge another’s servants? Or in our day, more to point, who are you to judge another’s kid? Well, you might say “I am a person of decency, who raised my own kids well. That’s who I am.” But in the end, the kids’ whose behaviour or appearance you are judging, is it your kid? Are you the God-given parent whose job it is to raise that kid? To judge what is right or wrong for that kid? Or what the appropriate punishment for the offences should be? Or even what the appropriate limits on a child’s behaviour should be? Because after all we all know how from generation to generation behavioural norms change. Every generation complains about “Kids these days,” and how the world is going to fall apart. And though the norms in your generation may have been good and right, and may still be good and right, often they become impossible to enforce, unless you are going to live out in the woods somewhere cut off from everyone. After all, the old maxim “kids should be seen but not heard.” Whatever you think of it, it hasn’t been possible for generations, even if it ever was. By the way, that’s how you know you are no longer a “kid” when you start to complain about what the “kids” are up to. And its probably how you know you are old, when you start calling the labourers and leaders of today “kids”. But the point is, if you are not the authorities granted to take care of those kids, or that business, you can complain about it all you like, but that won’t fix it, or fix them, or make the world any better. It only makes you miserable.

So don’t judge before the appointed time to judge those whom God sends. (1 Cor. 4:5) This does not mean God’s ministers are above reproach. They—we, I—sometimes need to be corrected. But make sure you are doing it on the basis of actual error. Verified by multiple witnesses, not just on basis of your preferred way of doing a thing. Make sure its not just you who thinks it should be different. Make sure Scripture agrees with you. (Isa. 40:8) Not just one verse you pulled out of context, but many clear verses. Because don’t you worry, that which is evil will be brought to light. (1 Cor. 4:5) And that which is hidden from your eyes now will eventually be revealed in the Day the Lord comes. So all the details you don’t know. The details that might explain exactly why this parent made that choice or why that pastor did this thing, will come to light. If you are too hasty in judging, if you are not judging from the clear light of Scripture, you will be in error. And in that day when Christ comes again and all hearts are revealed, your own selfish aims will be revealed to all.

The good news today though as we wait for Christ’s coming in our flesh is that there is comfort. (Isa. 40:1-2) Even when your shame, your hidden faults, your hidden motivations are revealed in that Day. For those who trust in that babe born in Bethlehem you will be clothed. Covered. Comforted. By the word of the Lord which stands forever. Even after kings have toppled, and their fine silky cloths (Matt. 11:8) have turned to dust, when the flowers have fallen and the grasses of the field have been burned up (Isa. 40:6-7), your righteousness declared to you on behalf of the babe born in Bethlehem will stand forever. For in that day when Christ comes again, all will be revealed. (1 Cor. 4:5) Good. Bad. Righteous and wicked. And you who stand before Christ now, righteous in faith which clings to His word which forgives and covers over your sin, will stand in that Day. (Isa. 40:2, 5, 8) For His Word remains forever.