Sola Scriptura—Scripture Alone: The Authority for Certainty of Salvation: Scripture over Tradition

The above audio is from the evening service.

“We receive and embrace with our whole heart the prophetic and apostolic Scriptures of the Old and New Testaments as the pure, clear fountain of Israel. They are the only true standard or norm by which all teachers and doctrines are to be judged.”

How do you know what you know? In science it is simple: you know what you know by what can you observe with your 5 senses, and then test, and reproduce it. That’s what you know you know. Things that are solid and constant. With human beings things change a lot. It’s hard to know what you know with humans. We act like humans are knowable. Like they are consistent. But then someone does something after years of knowing them that totally discombobulates you. It does not match with your notion of who they are. You are shocked. Scandalized by it.  You can’t make it compute with your image of the world. Maybe that person changed? Maybe your own impressions of things are wrong? Just your own wishful thinking? So how do you know anyone or anything?

Same thing happened for Luther and many others in his day. Luther’s big concern was how can I know for sure that I am saved? How can I know that God is merciful? He never doubted God’s existence the way we moderns do. But he was desperate to know if God could love him. For he felt his sin deeply. He took the Church’s teaching to heart that he was indeed sinful from the moment he was concieved. (Ps. 53:5) And therefore he was under the curse of the law. (Gal. 3:10) He felt that curse all the time. His repeated experience taught him that no matter how he tyrannized and tortured his body and soul to get it into shape, that he could not stop his evil thoughts from popping up unbidden. So he hated God for letting him be born in sin (Rom. 5:12ff) and for judging that sin. (Rom. 3:10-12) He hated Him more for God’s commandments which demanded perfect obedience. (James 2:10) Be holy, forI am holy. (1 Pet. 1:16; Lev. 11:44)

For Luther and many in their day the Church’s traditions did not grant comfort. For they told you to trust in a “treasury of merit”—a treasure chest containing all of Christ’s good works and the extra works of the saints. Sure, they said, Christ has granted you full forgiveness in heaven. But that you must work out your salvation in fear and trembling here below. (Phil 2:12-13, be sure to read verse 13!) For instance, if you do wrong you must rectify that. If you do not, well, God is just. (He won’t let you into heaven (which Jesus has opened to you) until you square things away here below. But, of course, the longer you’re on earth the more you realize how much you get wrong on a daily basis—without even meaning to. You exist in this world on the basis of the grace of others who live with you. For if they held every little slight you gave them, every thing you forgot to do, or failed to do—without malicious intent!—against you, you’d be sunk. The Scriptures know this, saying, “who can discern his hidden errors?” (Ps. 19:12)

Thus, the Church had realized in order for God to be just in this way—of requiring you to rectify all wrong doing before entrance into heaven—most of us couldn’t possibly do it, without living in a monastery. For regular daily life places so many temptations, so many chances for evil thoughts, words and deeds, that you could never do enough good, or even confess your sins enough or do enough penance to blot out all your wrong doing. Luther, in particular, knew this. He had joined a monastery. But even there he was plagued by evil thoughts, judgements, lusts, envies, anger. He couldn’t stop it. Even when withdrawn from the world simply to pray and do good works all the time he kept sinning. He tried to confess all those sins. He tried to do all the penance he could and then some. But every time he left the confessional booth after hours in there another sinful thought would be remembered and he’d go back to confess that too.

So how could he know he was saved? Well, his Father Confessor, who heard all of this tedious, insane confessing, sent him to study the Bible. In its original languages. It was the Bible, God’s Word, that taught Luther the truth of God’s free grace on account of Christ received by faith. The Bible is the ground and certainty of faith. It is the pure, clear fountain of salvation, by which all teachings of the Church are to be judged. It is our authority.

This was important because Church tradition had trumped Scripture. And since the fall of the Roman Empire books had become scarce. Education and literacy just as scarce. The average priest didn’t always know how to read. Let alone read the Bible in it’s original languages. And if he could read, he could only read it in Latin, which was not even the language of the people. And we all know how things get lost in translation from one language to the next. Just as they had gotten lost when Jerome, one of the Doctors of the Church, had translated the Bible into Latin—which was language of Roman Empire at the time. He had made an error when he translated “repent” as “do penance”. (Matt. 4:17; Acts 2:38) Hence, for 1000 years the Church in Europe had been using the Latin Bible. It had been reading “repent” as “do penance”.  That’s why confession—with its requirement that you confess and do penance for every sin you’ve ever committed—developed. That’s how the treasury of merit and purgatory—as a place where you know you’ll be able to do penance for any unconfessed, or penanced sins—had developed. That’s why things had gone so terribly wrong because they had depended not on God’s Word. But on their traditions.

Luther said popes and councils have erred and often contradicted each other so you can’t trust the traditions of men. You can only trust the clear fountain of Israel: the prophetic (i.e., the Old Testament) and apostolic (i.e., the New Testament) Scriptures.

Now, a common objection in our age is: but how can we really trust the Bible? After all, how did we get Bible? Now, most of you have seen or read “the Da Vinci Code”, or at least heard it’s arguments out there. The argument basically goes like this: the Bible didn’t come into its final form till around the time of Constantine the great in the 300s A.D. So before that it had been written and rewritten, and rewritten again. And then when Constantine got hold to it—after all, he was an oppressive Roman Emperor—he rewrote it to suit his fancies and meet his needs. So, how do we really know what the Bible said? Well, any actual search of the facts will totally disprove that theory. We have more ancient copies of Bible and all its documents—even those predating Constantine—than we have of any other old book. Think of Shakespeare’s plays. They are only 500 years old. Yet we have no single original copy of them. In fact, the copies that do exist differ with each other. Different endings, different plot details. We aren’t really sure what exactly Shakespeare ever wrote. Or which plays he wrote. Yet with the New Testament, which is 1400 years older than Shakespeare, we have so many copies with such unbelievably high agreement with each other that we are more than 99% sure what original copies of the books of the New Testament said. That’s impressive. Its just as the Lord in His Word said: I am watching over my word. (Jer. 1:12)

Another argument that the Roman Church makes is: "Well, tradition is more important than Scripture. Because after all how do we know which books of the Bible are actually inspired by the Holy Spirit? It was the Church, and her tradition that told us, that told us!” Which is only partly true. Jesus told us He sent His 12 disciples out as eyewitnesses of all that He had taught and done. (Matt. 28:20; Luke 24:47-49; John 15:26-27; Acts 1:8) As long as any of the 12 were around it was always possible to get another inspired book from one of our Lord’s eyewitnesses. And then of course, the Lord appeared to Saul of Tarsus, calling him. (Acts 9:10-19) And the Lord revealed who he must preach to, and what he must teach. (Acts 9:14; 1 Cor. 11:23-26; 2 Cor. 12:1-9, etc.) As long as those men were on earth it was possible to get another authoritative book. But once they were gone. Not. John, was the youngest, the longest lived of the 12. As long as he was on earth the Church felt secure because one of Our Lord’s apostles was still there. Before he died Jesus appeared to him and revealed a vision to him which we call the Revelation of Jesus Christ—the last book of the Bible. Every one in the Christian Church knew which books came from the apostles. They all agreed on it. It was only when some false teachers stirred up trouble in 2-300s that the Church had to hold council—sponsored by Constantine—in which one of things did was declare which books everyone every where agreed were from the Apostles. But Jesus’ own word that the Apostles were His eyewitnesses, that was what set canon: the set of which books are authoritative. Not tradition. But Jesus Himself. For all Scripture is breathed out by God and profitable for training in faith, reproof, and correction. (2 Tim. 3:16-17) So that you may be complete, your faith resting on the sure and certain foundation of Jesus Christ the Word of God made flesh and Him alone. Through His apostolically appointed word. That’s how we know what we know in faith. 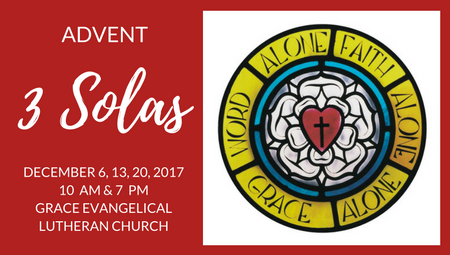 Sola Scriptura—Scripture Alone: The Authority for Certainty of Salvation: Scripture over Tradition

Sola Fide—Faith Alone: The Assurance of Salvation: Faith over Works

Sola Gratia—Grace Alone: The Agent of Salvation: Grace over Merit