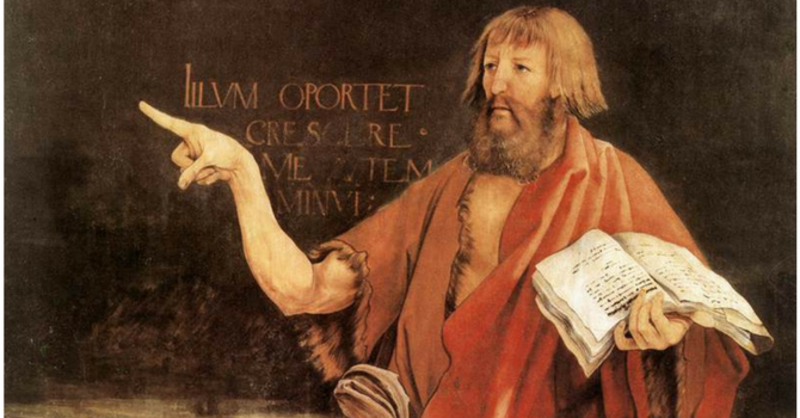 Well you faithful ones are here this Christmas Eve morning for one last moment of count down to Christmas. And you are treated to St. John the Apostle’s words immediately AFTER his nativity account (John 1:1-14) in which St. John says: the Word of God which was in beginning with God, which was God, became flesh.

But before that baby took centre stage, before He grew and became a man and started His public ministry of casting out demons, healing the broken, teaching the truth with authority and accomplishing the salvation of mankind, His cousin John the baptizer, was sent before Him to prepare His way. (Isa. 40:3)

He came at tail end of the Old Testament era. He had been a prophetic silence for 400 years. No prophet had risen up to write and call God’s people back to Him. There had been teachers who’d written books. We have many Jewish books from that era. Much history in that 400 years. But no Holy Spirit inspired books of the Bible given. Then John breaks forth on the scene. With preaching so amazing, so intense, with such authority that people went out into the wilderness to find him. (Mark 1:4-5) To listen to him castigate them for their sins. (Luke 3:7; Matt. 3:1-2, 7-10) And to receive his baptism of repentance for the forgiveness of their sins. (Luke 3:3)

But with any new popular prophet, any new movement, the establishment—whether a corrupt or a just establishment—is always a little leery of some outsider coming along to upset the applecart. The establishment of that day was understandably leery. For though until about 80 years earlier the Jews had had 150 years of freedom from foreign rule, the last 80+ years of Roman domination had been harsh. And the Jews resented it, as would you and I. Especially the high priests who for 100 years before the Romans came in were not only religious leaders, but also the kings of Judah. (The Hasmonean Dynasty) And here came John—an outsider, a wild prophet of old—baptizing, drawing the peoples out of their cities and towns out into the wilderness.

So the establishment sent out a fact finding mission to question the wild man. (John 1:19, 22) Find out why he’s doing what he’s doing. Get him to commit to something so that he claims to be the Christ, or some other Old Testament figure like Elijah who was to come before the Christ (Mal. 4:5-6); or the Prophet whom Moses spoke of who would be like Moses in that he’d be from the brothers of Israel. (Deut. 18:15, 18) But He would speak with even greater authority than Moses who brought the Old Testament to the Jews. (Deut. 18:18-19) THE Prophet would surely bring the New Testament (covenant) that Jeremiah had prophesied about. (Jer. 34:31-34) This is all very dangerous. Movements of change are always unstable. You never know where they will end up. They need to be managed if you are to maintain control and power in the midst of a time of change.

But John would not play their game. Yes, he was from the Lord. For he is the one whom Isaiah prophesied about, “A voice of one crying in the wilderness”. (Isa. 40:3; John 1:23) You could hardly disagree with that. They’d gone out into wilderness to hear John cry! But, no He was not THE Prophet, nor Elijah, nor the Christ. (John 1:20-21)

But he did testify that there was one in their midst who was coming after John, but was also before John (John 1:26-27), which could only mean that he is eternal (Heb. 7:3), He is God. That’s why John isn’t even worthy to be in the same room with Him even as the lowest servant washing His feet. (John 1:27) Therefore, if the religious leaders of Israel are kowtowing to John, and he’s not worthy of this One who is already in their midst, what does that say about the current religious leaders!? Especially since those religious leaders do not recognize that their own God is among them! (John 1:26) Their saviour has come and they’re missing Him! It’s a stunning rebuke. A powerful indictment of them. Its why the people were flocking to John for he said things no one else would say.

And they rejoiced. (Phil 4:4) They rejoiced at John’s clear teaching. At his crying out. At his clear denial of His own power or importance—I AM NOT the Christ. Not the Prophet (which was merely another image of Christ), nor am I Elijah come from the dead. (Though John did come in the spirit and power of Elijah, Matt. 11:11-14; 17:10-13; Luke 1:15-17; Mal 4:5-6) I am merely what you see in front of you: a voice of crying, preparing the way of the Lord at the hinge of history.

And so we stand today, on this flex day, this hinge. It’s Christmas Eve morning. But it’s not Christmas yet. Are you ready? Are you prepared? No, I don’t mean in a worldly sense. I don’t mean: are your gifts bought and wrapped? Are your goodies baked? I mean set that stuff aside for a moment. Get it out of your mental space. Are your ready for the Christ to come again? As in, has He come to you the first time? Because all you who are baptize have been clothed with Christ. (Gal. 3:27) You have received the Light of the world. (John 8:12) You do not walk in darkness. So set your eyes on Him, the author and perfecter of your faith. (Heb. 12:2) For He has sent His prophets to you: in the form of parents who brought you to church to baptize you and taught you to pray, in friends who encouraged your faith in Jesus, in pastors who absolved your sins and placed on your lips the body and blood of Christ our Lord. For He readies you, by sending Himself to you by His Word and Sacraments. For whether you are ready or not, He is here today, ready to enter your life. Ready to upset your finely ordered applecart. Ready to give you joy. And increase your calling upon Him in prayer and petition. (Phil 4:6) Ready to call you to Himself and away from worldly trappings of Christmas to its heart: to your God come to save you and the peace He gives you. (Phil 4:7)