The Water of Life — Easter Dawn 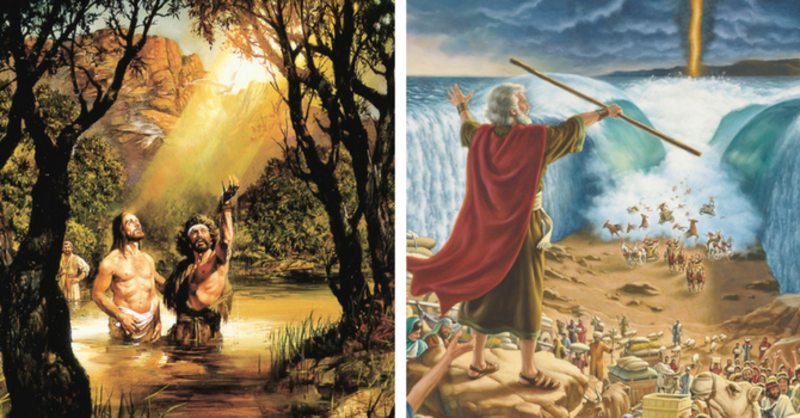 Christ is risen. He is risen indeed! Alleluia!

And yet when Pharaoh had finally humbled himself under God’s mighty hand, when he finally let Israel—God’s first born son (Exod. 4:22-23)—go. After 10 long warnings from Moses who started each warning of plague with, “God says, Israel is my firstborn son, let My son go, or I will kill your son." Finally after mighty work, upon mighty work, in which the Pharaoh, Egypt and all its gods were shown to be under the control of God Almighty, it had come to pass. In a final terrible plague. (Exod. 12:29-32) A plague in which Israel had been passed over. (Exod. 12:7, 12-13) In which the blood of the passover lamb had marked Israelite homes for life. For being passed over in the plague of death.

And now Moses, at God’s leading had led them into a trap. (Exod. 13:17-18) Not due north, up the seacoast to freedom, but south toward the Red Sea. (Exod. 14:1) And Pharaoh seeing it, despite all he’d suffered, decided he wanted his slave army back. (Exod. 14:5-9) How could he keep building great pyramids, sphinxes, etc., without half a million slaves? This would set him back. He had never believed in this God. He had six hundred war chariots. He could corral and herd his slaves back to their protective slave enclosures. Safe and sound to do his bidding.

But their God, put Himself between Pharaoh and His son Israel. (Exod. 14:19-20; 13:21-22) A pillar of cloud by day and fire by night kept Pharaoh from his prize which was sitting listlessly on the sea shore—like those men on Dunkirk beach in World War 2. When suddenly a wind started to blow. (Exod. 14:21) And how it howled. For Moses—that “wizard,” that babe drawn from the water (Exod. 2:4-6, 10)—was up to His water magic again, which isn’t magic at all, but the Word of the Lord working in and over and through the water, just as He does in Holy Baptism. But to Pharaoh he must have seemed a mighty magician for he turned the Nile, the life blood of Egypt to blood, so that everything in it died, it putrified and stank. (Exod. 7:17-18, 21) So that the Nile, Egypt’s strength, had turned to a river of death. Moses had done that with His staff. (Exod. 7:19) And here was Moses again holding his staff over the waters of the Red Sea. (Exod. 14:16) And a wind was howling, till finally in the morning the pillar of cloud—their God—moved and Pharaoh saw what their God had done. (Exod. 14:21-22) His wind, His breath, had made a canyon in the deeps of the sea. The people of Israel were escaping Pharaoh down into the sea. With walls of water on either side, and the people in the midst of the water. Dry land, a pathway for a nation, between. And water that if it were to do what water does would drown the million Israelites down in that valley of the shadow of death. In the miry pit. (Exod. 14:24-25; Ps. 40:2; 69:2)

To which the Angel of Lord whose Father laughs at kings in the imaginations of their hearts—(Ps. 2:4) in their schemes against Him—told Moses on the far side of the sea, “Hold out your staff again.” (Exod. 14:26-28) and as the last of the Israelites came out of that valley shadowed by death the waters crashed down on Pharaoh and his horses, all his chariots in the midst of the sea.

For the Lord drew Moses out of the water. (Exod. 2:4-6, 10) That is what His name means—“drawn from the water”. He raised him up to be the greatest prophet of Old Testament. The man who set God’s people free. He used Moses to baptize His people in the waters of the Red Sea. (1 Cor. 10:1-2) For on one side of the water they were slaves. On the other side they were free men! The water changed them. Just as baptism changes you. On ones side of Holy Baptism you are dead in sin and transgressions. On the other side of water you are God’s free child with all His good pleasure.

For this is our God. He deals in death and resurrection. (Deut. 32:39) Death is no obstacle for Him. Unbelief will not keep Him from accomplishing His goals. Which of His own disciples believed that He risen just as He had said?  Certainly not Peter, their unofficial leader. He scratched his head. (John 20:6-7, 9) He couldn’t figure out what had happened on that first Easter Sunday. He went away confused. Jesus had risen. His angelic messengers spoke to Mary. (John 20:11-13) But not to Peter. He was too deep in the mire of grief to hear the word and believe. To see what was right in front of His eyes. For some reason, we not why apart from our Lord’s grace and favour, He chose Mary to bear the message of His resurrection to His disciples. first to Peter and John. (John 20:1-2) Then to the rest of the Twelve. (John 20:17-18)

For this is our God. He deals in death and resurrection. (Deut. 32:39) It’s hard to believe. But this is what He does. So that you who are here this day, in faith have passed over from death to life. (John 5:24) This is not merely a metaphor—like the idea of being changed so dramatically by some new dawning realization that its as though you are a different person, living a different life after this realization. That certainly may be an experience you have had. But in your baptism—spiritually you have died to sin (Rom. 6:3-4)—died to those forces who though they do not enslave you the way Pharaoh did with task masters and physical beatings, certainly leave you enslaved. Enslaved to Satan who uses your desires as chains to ensnare you and hold you fast. And we who live in our bodies of flesh, are always aware of our mortality. So that apart from this Word of resurrection, humanity always lives with uneasy awareness that we will die. As a culture, cutting ourselves off from the faith of the resurrected Jesus, we are becoming less and less able to cope with death. For we do not have any answers that make life easier apart from Jesus. At the very least, Jesus gives you courage to live without the fear of death. (Heb. 2:14-15) For you know that your life is secure in Him. For now by faith in Christ you who were a slave have passed from the slavery of sin via Christ’s death, into newness of life in Him.

All of this is not seen by you or me. Rather it is believed with the heart. Confessed with the mouth. It is lived in your body as you live as one who loves boldly, who cares about others, who risks extravagantly to do what is right. For there are worse things than death. (Matt. 10:28) And we are not scared of death, for we have already passed from death into life by our baptism. (Rom. 6:3-4; Col. 2:12-13) We live a life not our own. (Gal. 2:20) But a life as part of His eternal kingdom. Doing His bidding. Living as His people!

And this is not merely some fairy tale. For if Christ is not raised from the dead we are most to be pitied amongst all mankind. (1 Cor. 15:14-17) We are fools coming here early on this Easter Day to pay homage to some fairytale. Some lie we tell ourselves to deal with the unbearable cruelty of existence. (2 Pet. 1:16) But it is not merely just a comforting story. It is based on Christ’s real actual victory over death. (1 Cor. 15:3-8) Which means that all this other good talk of spiritual transformation, of life after death, of miraculous happenings are on a firm foundation. On the foundation of Christ. (1 Cor. 3:11) Of Him who was raised from the dead. Who has authority to declare things that are unbelievable, for He has conquered death. For Christ is risen. He is risen indeed!