The Shepherd of Life — 3rd Sunday of Easter 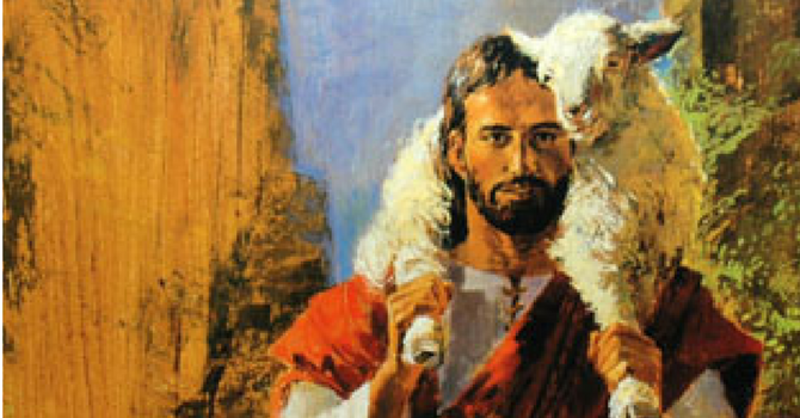 Christ is risen! He is risen indeed. Alleluia!

The Good Shepherd is the shepherd of life. For that is His concern. Life. Life to the full. (John 10:10) He is not concerned about making a living for Himself off of His sheep. He does not fleece them. He does not slay them so that He might eat them and they sustain His life. No, He shepherds them with His life. (John 10:11) He feeds them His flesh. He uses His protective rod to fend off the wolves (Ps. 23:4b), His staff for yanking you out of life-threatening danger. He fends off the wolves and yanks you out of danger by letting those two pieces of wood be nailed together, and letting Himself be nailed to that wood. (1 Pet. 2:24) For the Good Shepherd shepherds His sheep by laying down His life for His sheep. (John 10:11, 15) He is good for He carries in His own flesh your sins to that wood of the cross (1 Pet. 2:24) where they are removed from you. Put to death in His flesh. So that you might die to sin and live in justification. (1 Pet. 2:24) For He is good in the way Good Friday is good. It was a day of cloud and deep darkness. (Ezek. 34:12; Luke 23:44-45; Matt. 27:45) It remains a day of somber commemoration and reflection on what He has done. It is not a jovial day. But a day of darkness, of doom and gloom, and the gravity of my sin. Yet it is a good day on which our flesh is redeemed. On which our lives are secured in His sheepfold. (John 10:16) By the death of our sin in His flesh on the wood of the tree. (1 Pet. 2:24)

For this is how your Shepherd shepherds you. He dies for you. (John 10:11, 15) And rises for you. Which means that He shepherds you through the valley of the shadow of death. (Ps. 23:4a) He is with you even in death. For He went into death’s dark vale before you. Into the jaws of death. He confronted the wolf. And was gobbled whole by it. But He did not stay in belly of the beast. But rose on the third day. (John 20:1-18, etc.) Emptying the tomb. Emptying death of its power. And the wolf of its terror. (John 10:12) The fear of death is no more for those who are raised to new life in Christ. (Heb. 2:14-15) For Christ has conquered death. And He shepherds the living into His eternal sheep folds.

Christ our Lord said all this to His living flock gathered round Him. That He would shepherd them through death by laying down His life for them. (John 10:11, 15, 17) But it is not only the living whom He will shepherd through the jaws of death and out the belly of the wolf, it is also those who have already been consumed by death. (John 10:16) For the saints who had gone before Him who had eagerly looked forward to His coming, they too would be escorted by Him out of the mouth of death. Spat forth like Jonah from the midst of the sea. (Jon. 2:10; Matt. 12:39-40) Raised from the belly of the beast. They too were added to His fold by His coming forth from the grave. So that there is one flock. (John 10:16) Old Testament believers before Him and New Testament believers since Him.

His forming one flock of the living and the dead happens because as your shepherd, He has purchased you. (John 10:12, 14) He bought you at the price of His holy precious blood and innocent suffering and death. That means that statement “the Lord is My Shepherd” (Ps. 23:1) does not mean you chose Him, but that He has purchased you. It’s a done deal. You belong to Him. If He loses you He will find you. For He is responsible for you. (John 6:39; 17:12) And so, having purchased you, having brought you into His fold, He feeds you upon the pastures of soft, new, green grass where it is safe and secure to lie down. (Ps. 23:2a; Ezek. 34:13b-14)

But as a sheep living in the world you often go astray. It’s what sheep do. (1 Pet. 2:25; Isa. 53:6; Ezek. 34:16) They follow their stomachs. Without a shepherd watching over them they will graze themselves away from the flock, away from safety, into a thicket, or right over a cliff. They won’t pay any attention. They just keep their head down eating one blade of grass after the next till they find themselves lost. For all we like sheep have gone astray. (Isa. 53:6; 1 Pet. 2:25) Each of us has turned to his own way. That’s the basic spiritual problem that plagues all humanity: our desire to follow our own desires, to listen to no one but ME. And that wolf Satan loves to steal and kill and destroy. (John 10:10) He loves to scatter the flock of the Lord (John 10:12) by fanning into flame your desires—tempting you to worship yourself and your wants, to not lay down your life in love for others; to not pick up your cross and follow your Shepherd. (1 Pet. 2:21; Matt. 16:24-26); to His mountain height where His cross was erected for all world to see. (John 12:42; 3:14) So the wolf scatters the flock and unless our Shepherd sought us out and restored our soul (Ps. 23:3) we would be lost eternally. Repent.

For your Good Shepherd doesn’t just baptize you, and put you in His fold. He hunts you down when you stray. For He seeks you out and visits you. (Ezek. 34:11) For that’s what Overseer of your soul means. Overseer or Bishop means “visitor”. He is the one who seeks you out. Who visits His repentance and His justification upon you. (1 Pet. 2:25) For surely goodness and mercy will follow me (Ps. 23:6), trail behind me, stalk me—not like a wolf, but like a Good Shepherd who lays down life for sheep, allowing the wolf to ravage Him to save His sheep from wolf’s jaws. And by doing so He returns you to Himself.  To His flock. He restores your soul. (Ps. 23:3) He brings back the strayed. (Ezek. 34:16) All of which is to say: He repents you. He turns you from your own way. To Himself. For His sheep hear His voice. (John 10:16, 27) And they follow Him.

They follow Him in paths of righteousness (Ps. 23:3)—both paths of righteous action and paths of justification and life. For as His sheep following Him He brings forth those new desires in you. (1 Pet. 2:21) Those good works which He has prepared in advance for you to do. (Eph. 2:10) Because following in your Shepherd’s footsteps you follow in His way. (1 Pet. 2:21) In His example. But more importantly than that, His path of righteousness is the righteousness of Christ which is not earned or deserved by you, His sheep, but is bestowed upon you by grace. By His unearned favour. By His sacrificial love for you. For your Good Shepherd has laid down His life for you that you might live in Him. (1 Pet. 2:24)

He entrusted Himself to His Father who judges not only justly but justifyingly (1 Pet. 2:23) so that you and I might die to sin and live in His justifying righteousness. (1 Pet. 2:24) For that is His path of righteousness in which He leads you for His name’s sake. (Ps. 23:3) It is His way of taking up His cross, granting you forgiveness of your sins and life everlasting in His name. For you are His. Part of His flock. And with His mark upon your forehead and your heart you belong to Him and will live forever. (Ps. 23:6)

For Christ is risen! He is risen indeed. Alleluia!