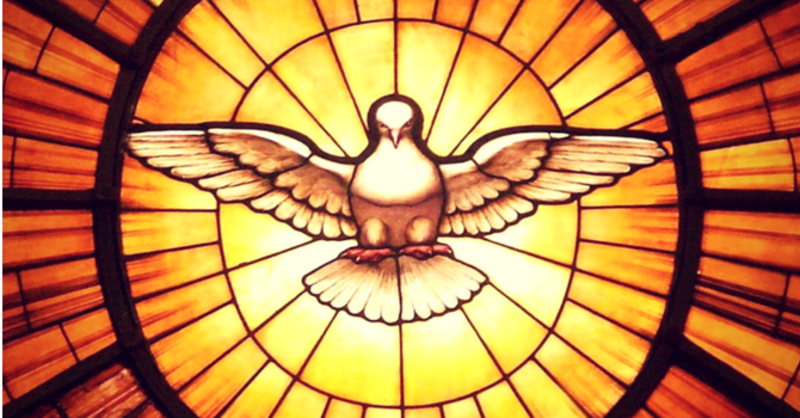 On Holy Thursday when Christ our Lord said that He was going to the Father He was speaking of His imminent depart via death. (John 16:5) But He was also speaking of His secondary departure via His Ascension (John 16:10b)—which happened 40 days after His resurrection (Acts 1:3), which means, this Thursday, 5 days from today.

So the impact of His death and res and subsequent ascension is that His Spirit would come. (John 16:7) That’s the purpose of the Ascension which we celebrate on Thursday evening—that He would send His Spirit. And the Spirit has 3 purposes, 3 things it preaches, and by preaching them convicts the world of them: sin, justification or righteousness, and judgement. (John 16:8)

Sin is self-evident. We sin. We miss the mark. All fall short of the glory of God. (Rom. 3:23) But now that Christ has been sacrificed for sin, sin is not what separates you from the Father. Rather, not believing in Jesus’ sacrifice for you is what separates you. (John 16:9; 3:17-19) Which is why the Spirit must go into the world through preaching of word of repentance. Repent and believe in Jesus for the forgiveness of your sins. (Mark 1:15; Acts 20:21) If you will not, you are still in your sin. You have not yet received the benefits of the cross—that atoning of all the sin of all mankind by Christ’s blood shed there.

Justification or the righteousness of faith is also pretty easy. For having atoned for sin, having commanded and commissioned the ministry of teaching and preaching (John 20:21-22; Matt. 28:19-20), Jesus went to the Father in His flesh at His Ascension and poured out His blood on the mercy seat of God in heaven. (John 16:10; Heb. 9:11-12, 23-26) So that from now atoning sacrifice of Christ’s blood (1 John 2:2) avails for all sinners who in faith call upon Jesus. (Rom. 10:13; Joel 2:32) For through Jesus you now have unfettered access to the Father’s mercy (Heb 10:19; Eph. 3:12) on account of Jesus’ blood poured out. Jesus was pleased to save you out of great love for you and out of great love for His Father—who designed within the workings of the Holy Trinity that this is how God’s judgement against evil and His mercy for His beloved children would be satisfied and reconciled with each other. The Triune God would accomplish an atonement by the blood of the Son of God, through taking human flesh into the Godhead, so that all sons of Adam and daughters of Eve might be purchased and cleansed of their rebellion against God.

Thus the Holy Spirit convicts the world first of the need to repent, then of Christ’s justification of them, and thirdly of judgement—that Satan is judged. (John 16:11) His power over sinners through our first parents’ fall into sin and his constantly tempting us is broken. Satan is recognized as the source of sin and judged as its cause. The power of sin is now broken by Christ who took on our flesh, yet without sin (Heb. 4:15), and paid sin’s wages (Rom. 6:23) once and for all. So that those who are in Christ Jesus are now free of Satan (Col. 1:13-14) and able to resist him. (1 Pet. 5:8-10; Jam. 4:7; Eph 6:11) Even when they fall into temptation they have an antidote—the blood of the Son of God which cleanses all our sins. (1 John 1:7, 9) This is the threefold purpose of the Holy Spirit: to go into all world proclaim these three things.

The Spirit’s purpose is to declare this—through Christ’s Church (Eph. 3:10), by the office of preaching within the Church (John 20:21-22; Matt. 28:19-20), and through you and me in our lives. (1 Pet. 2:9) To make us, the messengers of His church, bold so that we declare it to those whom the Father puts into your life: children, spouse, siblings, friends, etc. For this is what the Holy Spirit inside you does—He declares these things. These things which are not from Himself. They come from the Father. (John 16:15) For the Spirit only declares that which He hears. (John 16:13) Out of love for the Father He is on a mission. He sticks to His talking points. He declares what the Father has declared. And this is not the Father’s alone. (John 16:14-15) It is also the Son’s. For the Spirit takes what is our Lord’s and declares it. He has heard it from the Father, when the Father declared through His Son on Good Friday, when the Son gave up His spirit and went to the Father, saying, “It is Finished.” (John 19:30) Having poured out His atoning blood on the dust of the earth, at the place of a skull (John 19:17), the place where Adam’s skull was believed to be and the place where the Serpent’s head was crushed. (Gen. 3:15) Where Satan was judged. So that having poured His living blood onto the dead dust of planet earth new life was given to the dust of earth, to we who are dust. (Gen. 3:19)

For in God’s great mercy He has sent His Son. And the Holy Trinity has sent the Spirit into the world to preach this saving news which gives faith and life. Preaching does it. (Rom. 1:16; 10:17) Not slick church programs. Not effective out reach. Not even acts of mercy which are good for your neighbour. Preaching of Christ crucified for sinners. (1 Cor. 1:18, 23) The only hope of mankind.

Not even emotionalism does it. The Church has been very focussed on emotions for a generation or more. We’ve toyed with emotionalistic worship, with slick advertising campaigns or crusades, with preaching or worship that tweaks the emotions with the point of bringing someone to a decision. Christians of one variety or another have given full vent to the gamut of emotions. From anger and rage over wickedness, to fiery “turn or burn” preaching, to ecstatic experiences of joy and love for God through mantra-like songs strung together like a movie score in order to lift your emotions at just right moment, etc. But the anger of man does not produce the righteousness of God. (Jam. 1:20) It does not create justifying faith. We could add that no emotions of man create justifying faith. Emotions are not equal to faith. Emotions are simply an expression of the soul. Emotions give you a clue of what is already going on deep down inside you. And many of us here, being from rather stoic northern European backgrounds, are not highly expressive of emotions. We don’t always know what’s going on in our emotions. So, especially for you, maybe it is good news that emotions do not equal faith. Nor does manipulation of emotions create faith. Nor even if we had a more emotionalistic worship service, even if it might (that’s a big IF) cause more people to come, does it mean that any of them are actually in the faith. For faith comes by hearing what is preached by the Holy Spirit. (John 16:7-8) The Holy Spirit gets what He preaches from the Father and the Son. (John 16:13-15) So that together Father Son and Spirit are worshipped and glorified.

For this preaching does something in your soul. It convicts you of sin. It creates saving faith in Christ’s death and resurrection for you. And it creates the joy of salvation within you. (Isa. 12:2-4) For preaching exalts and lifts up the Holy One of Israel in our midst. (Isa. 12:5-6) It lifts up Jesus on the cross for all humanity. When you tell that cross of Christ is lifted up for their salvation He is glorified. The Spirit is doing His work.

For by preaching of the Father about the Son through the Holy Spirit you and all who hear and believe are saved and granted life evermore.