Grace, mercy and peace be to you in the name of God our Father and our Lord Jesus Christ.

Our text for meditation this morning is 2 Samuel 22:27,

with the purified you deal purely,
and with the crooked you make yourself seem tortuous.

King David sang these words when he was delivered from his enemies, especially from King Saul. David truly experienced hardships in his life, times when he knew a wrong step would get him and all who followed him killed. Yet, David was confident in the Lord. Maybe we are not fighting for our lives in the flesh right now, but we are in constant spiritual battle against the sin and evil within this world. God was David's rock, a place of refuge which would protect and shelter him. Just as God shielded David, God is our protector as well. God is our mighty fortress. He is the one who protects us and guards our souls from evil, and we need Him with us always.

During his life, David needed God to always protect him. King Saul was anointed as the first king of the twelve tribes of Israel. At first things were great, but Saul began turning from God. Saul decided to look at things of this world rather than follow the commands he was given by God. God then secretly had David, a shepherd boy, anointed as king. David followed both God, his king in heaven, and Saul, his king in Israel. Saul thought David would try to take the throne away, so Saul tried to kill David time and time again. David had to go on the run with Saul nipping at his heals. God was with David, He did not allow David to be overtaken by Saul. In fact, God gave Saul into the hand of David twice and both times David spared Saul's life. David had faith in his God that the Lord would judge both David and Saul justly. David had nothing to fear from Saul when God was on his side. By faith, David was doing the will of God, so God dealt with David purely. Saul who was following his own self-interest felt tortured by the Lord and David, whom the Lord protected. God dealt purely with the purified and appeared to be tortuous to the crooked.

Like David, we might feel that there are things that hunt us in our lives. Temptation lurks behind corners, waiting for a chance to overtake us. Our faith is in God who will deliver us from temptation—from Satan and our sinful nature. The Lord supplies us with every spiritual blessing to preserve us against the crookedness of the world. The Holy Spirit also works righteousness within us and works so that by His power we may resist temptation. Although temptation tries to overtake and consume us, God assures us that He will never allow us to be swallowed whole. God is our shield, He is our rock in times of trouble. God makes us pure in His sight and He deals with us purely. By His great mercy, our Lord saves us, His people.

King David was saved from his enemies by God, but the worst enemy David had was himself. Many years after King Saul died and David was enthroned over Israel, David looked and saw a woman named Bathsheba bathing. David was consume by lust and slept with Bathsheba although she was a married woman. When David discovered she was pregnant with his child, David had Bathsheba's husband killed and took her as his wife. For this evil act, God took away the child Bathsheba bore David. David, who had done evil before God, felt tortured by God. While the child lived, David begged God to keep the child in this world. Food and drink did not pass David's lips as he fasted before God. David did not know the comfort of a bed because he cast off comforts to sleep on the ground. Seven days after David's child was born, the child died. David—who felt tormented as he lay on the dust, letting his stomach starve—got up at the news, washed himself, put on clean clothes then ate his fill. David thought God might let the child live if he repented in dust and fasting, but after the child was gone David knew there was no more to do. David had done evil and felt tortured by God because of it.

Even though David felt tortured by God, David knew that God was being just. God gave David a punishment fitting his crime. David felt the twisting of his spirit as he saw his punishment being carried out. Yet, David did not accuse God of any wrongdoing. God had given David a child by Bathsheba, and the Lord took away that child so David could only see the child again in the life to come. God was still the one who deals purely with the purified, but He also made Himself tortuous to the crooked.

It is easy for us to be like David, to give into temptations and succumb to sin. We may not feel the temptation to lust as David did, but we certainly have our own vices—be they greed, hatred, lying or what have you. We are all different and we are each tempted by different sins. If one person is weak to members of the opposite sex, another can be weak to gossip and spreading rumours that harm people's reputations. Whatever your weaknesses might be, we know that we are not free from sinning, we are incapable of resisting temptation on our own.

The evil we know and we remember, the evils we commit again and again, these hurt us. We remember our worst misdeeds and they can torture us. Recollections of our past can haunt us, draw us back to the moments when our temptations crept into our lives and took over what we were doing, thinking or saying—and we sinned against God. Through our weaknesses we were brought low, brought down into sin. When we then look up toward God, we might not see the one who deals with us purely, because we do not ourselves feel pure, but we see God appear as someone who tortures us—accusing us of evil. We might see God our Father as twisting us to the point of breaking because we feel like we are crooked—as those who have gone the way of the world and given in to temptation. We feel crooked and God punishes those who are sinful. He is definitely the same God as before, the God who deals with us purely. Yet, because we feel different—because we feel sinful—our impression of God can shift from a loving protector to an overbearing master who is to be feared.

Seeing God far off—seeing God only as a master who will punish us—certainly does place us in an awkward position. We view our God as someone who twists us with our guilt but we know that God is the one who deals with us purely. We need to turn from the image of God as a punishing master to a servant who cuts our debts because he takes our debts—our sins—upon himself. Our Lord Jesus Christ has come to us on the cross so that we may know that we are not the ones twisted by our guilt—he is the one has taken our sin and guilt from us and was himself tortured because of it.

We see Christ as the one who took all sin upon himself—who has taken your sin, your guilt and your shame upon himself. Although Christ had never sinned, he readily and willingly took your sin so that you do not have to stand before God weighed down by your guilt. Jesus shouldered all our evils and took them to his cross. The cross, and the road leading up to it, was where Christ underwent the torture for our sins. Christ was tortured in all manner of ways by this task. Christ was tortured emotionally knowing he would bear the sins of the world and be sacrificed before God the Father. When he was praying the night before he was crucified, Christ was so emotionally stressed that he sweated drops of blood. Christ endured bodily torment as well, being beaten, pierced by thorns, forced to carry a cross in a hot sun, and having nails driven through his flesh. Most severe of all, Christ was tortured spiritually. On the cross Jesus knew that he would be the only person ever to live who would not be shown mercy by God the Father. Because of every sin laid upon Christ, our Lord Jesus saw that the Father would not save him from death. For our sakes Christ knew that he would be not be shown mercy so that mercy could be shown to us.

Our sins are no longer ours, they were taken from us by Jesus Christ. Our sins and our guilt made us crooked—our sin made us deserving of the full torment of God—but our sins are no longer upon us. Christ took all our lust, hatred, greed and everything else upon himself so that we may be purified. Baptized believers have been washed clean by the blood of Christ and made pure by the Holy Spirit. We have been made pure before God our master. Jesus has taken away every imperfection from us and God deals with us purely because of Christ.

There is no fear of torture anymore when we look toward God. Through His mercy, God has removed what made us crooked because of Jesus Christ. The full brunt of God's punishment was dealt out to our Lord, Jesus Christ. Christ was punished for our sins and guilt so we would not receive punishment but the pure love of our Lord. Made pure by Christ, we can now see God as He is, the one who protects us from every evil by taking that evil upon Himself. Christ has shown us that God does not torment us as crooked people, but Jesus Christ reveals himself as our Lord who makes the crooked pure so that they might be dealt with purely. Christ is our shield and protection. He is our rock and salvation from all tribulation. Amen.

The peace of God that surpasses all understanding guard your hearts and minds in Christ Jesus. Amen. 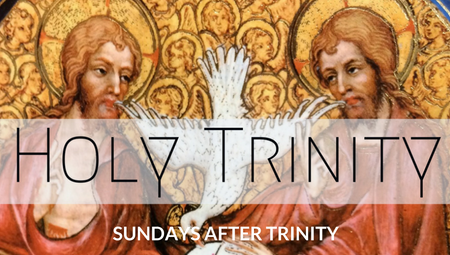 Jesus is Not Your Boyfriend — 25th Sunday after Trinity

The Sword of the Spirit — 21st Sunday after Trinity