The Groaning of the Earth — 2nd Sunday in Advent 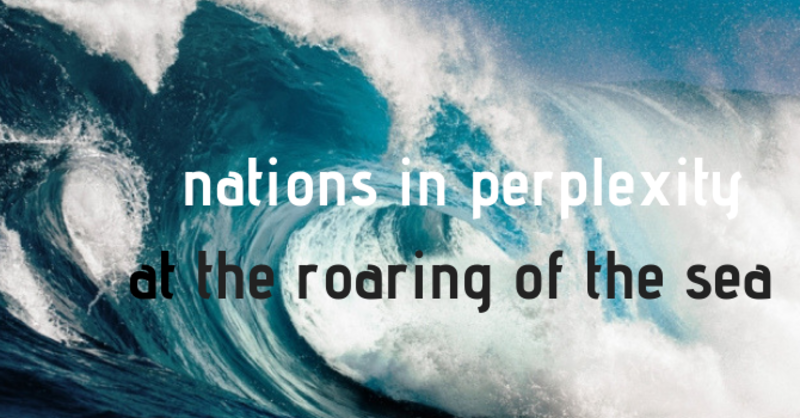 Creation waits in eager expectation waiting for the Sons of God to be revealed (Rom. 8:19)—God’s sons, His inheritors, you and I, regardless of our gender. For there is no male nor female in Christ with regards to salvation. (Gal. 3:27-29; 1 Cor. 12:13) In your salvation you are all equally inheritors of God. And creation longs for us to be revealed for what we are. So much so that the rocks will sing to praise Jesus if we will not (Luke 19:40; Matt. 27:50-51) and the skies poured forth speech the night He was born. (Luke 2:13-14) Even now, creation groans longing to throw off the shackles of sin and its misery in the world. It waits for the Son of God to come, revealing Himself, and all who are His.

The universe groans. These groanings are signs of our Lord’s second coming. The universe shudders, it spasms, it groans and quakes longing for the freedom to come. The powers of the heavens are shaken (Luke 21:26b) by tropical storms, hurricanes, and typhoons stirring up the seas, causing devastation like Katrina in ’05, Harvy just last year, and Sandy in 2012. The earth shudders with spasms and quakes causing tsunamis like in Japan in 2011, or Thailand and Sri Lanka in ‘06.

The nations are perplexed. (Luke 21:25) They are at a total loss as to what to do. There is much talk of global warming (or the new term “Climate change”) as a cause of all this sea surging. Yet no one can come to consensus on how accurate the scientific predictions are or even what to do about it. So that nations are literally in perplexity at the roaring of the seas. And mankind loses heart over what to do about any of it. We throw our hands up in air at these problems, losing heart over what is coming.

For what are we to do in our little corner of the world? Is there any hope? What good can I do? How can I fix this? Rock stars and movie stars can’t fix it even when they try. Governments can’t fix it. The UN can’t get their act together even if mankind had the power to fix these problems.

So we lose hope in expectation of what is coming. But what is coming? Our Lord is coming. (Luke 21:27-28) He is coming again. That’s what creation is shuddering about in eager anticipation, in excitement.

For just look at our Lord’s example: the coming of summer! (Luke 21:29-30) Is that something to dread? Yet the world does dread our Lord’s coming. Why? Because the world either does not know what is coming or fears His judgement. And we get caught up in this fear, as if all these things weren’t predicted (Luke 21:31-33), as if our Lord didn’t have a plan, to bring to completion the salvation He won for us when He came the first time. (Luke 21:28, 31) Repent.

You are His Son—male or female—you are an heir of heaven itself. Your name is written in the Lamb’s Book of Life. (Rev. 21:27) And though heaven and earth pass away His Word written in His blood shall not pass away. (Luke 21:33) For all that He has planned will be accomplished. All that He has spoken will be confirmed and revealed. He has spoken over you that you are His in Baptism. So on the Last Day, when He comes again, this time not in meekness but in flashing clouds and great power (Matt. 24:30-31; Rev. 1:7), He will reveal those who are His. (Rom. 8:19) And His own will be gathered around Him (Matt. 24:30-31) so that there will be one flock and one Shepherd. (John 10:16) The goats who have pretended to be sheep, but never trusted in Him nor followed Him, will be separated from that number. (Matt. 25:31-33) They will be revealed for false sheep, for those who liked to talk of their good works, but never produced any in faith, for they had no faith in their Shepherd who saves. (Matt. 25:41-46) The sheep will be congratulated and proclaimed to be exactly what they were. (Matt. 25:34-40) They will be credited with good works that the Holy Spirit prepared in advance for them to do. (Eph. 2:10) However, these works were done in secret, even from themselves. (Matt. 6:3-4) This is so that they would not trust in their works, but only in their God.

And so as Christians we need not fear that day, but pray! (Luke 21:36) Pray that we will escape by faith the trap coming upon the rest of humanity. (Luke 21:34-35) For faith is key to getting out of that trap which comes upon all mankind. Faith in Christ springs the trap on our coming Lord. For in His first coming He allowed Himself to be caught in the trap of God’s judgement. The judgement ought not have stuck to Him for He knew no sin. (2 Cor. 5:21) But He took our sin upon Himself, springing the trap of God’s sudden judgement and wrath against sin on Himself. He paid in His First Coming for the sins of all men. So trusting in Him, there is escape in advance of His Second Coming. Escape that supplies the needed strength to stand before Him when He comes in judgement. (Luke 21:36) And strength comes from He Himself and His Word that He has spoken over you (Rom. 15:4) and will speak over you as you stand before Him: You are my Son. (Matt. 3:17)

And so we pray. We pray for such faith to cling to Him. (Luke 21:36) Faith that sticks to Him as our sins stuck to Him. Pray for faith to not get inebriated, stupid, unthinking either by physical drunkenness or by the worries of life in this world. (Luke 21:34; Rom. 11:13-14) For those things are both equally traps to us that make us unthinking, foolish, and ignorant of His Second Coming. And they spring upon you when you least expect them to. So pray. Pray for wakefulness (Luke 21:36), for that day will come upon you, whether you are still alive or have already died. Pray for spiritual clearheadedness and sobriety that you may stand in faith before our Lord on that wonderful day when He reveals you to be a Son of God.

For this kind of faith leads to both clearheadedness and single mindedness with the whole Church throughout all time. So that with one mind, with one voice we confess our faith in our Lord together. (Rom. 15:5-6) Now when people hear the word “confess” they think of admitting to sins. But “to confess” is simply to say what God says. God says, “You are a sinner,” and you say, “I am a sinner.” God says, “You are forgiven on account of my Son who came in the flesh of an infant boy,” and you say, “I am forgiven.”

And this unified, single-minded speaking changes your thinking. You repent of your individualism and confess that you are one in Christ. You are saved. You are His. You love each other as He has loved you. You wrap your arms around each other as He wrapped our flesh around Himself. For Christ our Lord is the true gift, wrapped in the flesh of a man. He is love, far more than any other physical gift could ever give. For He is the gift that keeps on giving so that streams of the living water of faith flow within you. They flow and continue to flow till you are completely filled and overflow. This is how the works that Christians don’t even know they are doing happen. The Holy Spirit overflows from you in acts of love. Love that you might not think is so loving as you grudgingly do your vocation of mother, father, husband, wife, son or daughter without thanks, without recognition, sometimes even with resentment inside you. But in faith these works are counted good. In faith His love overflows from you through them. In faith you love each other and lift each other up so that we all can endure the struggles that life pours out on us. And even this is from our all-knowing, all wise Lord who is arranging these struggles in advance for you and I to be able to love each other in them in preparation of His coming again. (Mal. 4:6)

So do not be discouraged. You are loved. Do not be afraid. You are His. Do not be disturbed like the rest of our world, for you are awake and aware of what our Gracious God and Father is up to. Your redemption is drawing near. It is almost here.

The Groaning of the Earth — 2nd Sunday in Advent