The Epiphany of Our Lord -- Wascana Circuit 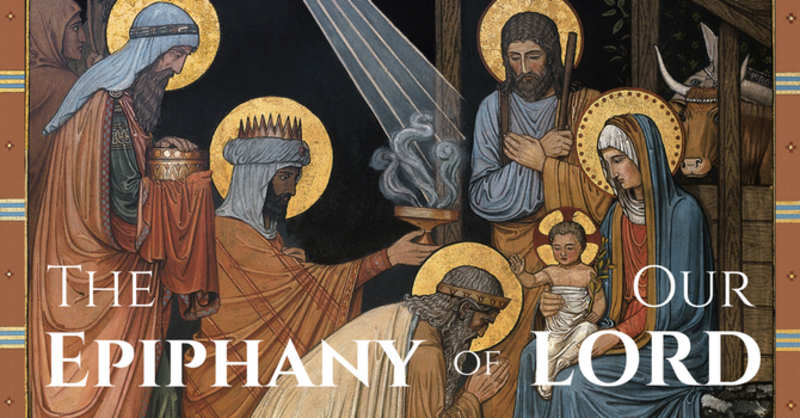 The Star appeared. The wisemen of the nations came. (Matt. 2:1) They brought with them the wealth of the East: kingly gold, priestly incense, myrrh for embalming. (Matt. 2:11) They came to bow before a baby wrapped in swaddling bands. (Matt. 2:2) They reverenced He whom they named King of the Jews. A King, not a priest, yet they brought Him incense. Incense which burns in the presence of God both in the old earthly temple and in that temple above not made by hands. Except there, it is not aromatic resins burnt to produce mystical smoke that fill the temple, but the prayers of the saints which arise before the Almighty as the sweet aroma in His nostrils. (Rev. 8:4; Ps. 141:2) For this King is a Priest who intercedes for you—prays for you. (Heb. 7:25; Rom. 8:24) But not a priest of the old order. (Heb. 7:11-14) Not born of the old priestly line, of Moses’ brother Aaron, of the tribe of Levi. Not a priest according to the Old Covenant. He is born of the kingly line, of David, out of the tribe of Judah. (Matt. 2:6) He is born of the tribe which the promise of the Messiah, the one anointed to save His people, had been given to. (Matt. 2:6; Mic. 5:2) This King of the Jews is that Messiah. He is a priest whose life shall be expended as a prayer that God our Father hears on behalf of sinful mankind. That is why these non-Jews, to whom the promises of the Old Covenant were not given, also brought myrrh, the embalming spice, the calming, soothing perfume. For this King’s death will be a prayer to God not merely for Jews but for those wisemen too, and all who fall before Him asking for His mercy. (Rom. 10:13)

The Star betokened this. It appeared. It made known, manifested, epiphanied the Christ. It was shepherds in fields who had worshiped Him first. (Luke 2:8-20) Good Jewish folk, earning a living with their hands. They knelt before Him and praised Him who comes to Shepherd His people. Shepherds who would have birthed and wrapped lambs in such a way in order to keep them pure and unblemished if such lambs were intended for the Passover sacrifice. And they told all the surrounding countryside (Luke 2:20), so that even Jerusalem heard of this miracle told by the angels of a mummy in a manger. A baby swaddled the way any baby in those days was. In loose bands of cloth—so that the beginning of life in mid-east parallels the end of life there. Beginning and ending wrapped, swaddled in bands of cloth, but at the end those clothes are soaked in myrrh if you can afford it. That’s where the Wise Men come in. Their gifts proclaim Him to be king of Jews. Their gifts enrich Him and ready Him for death. So that at both the beginning of His life and the end of His life He is declared King of the Jews. At the beginning by eastern sages, at the end by a Roman governor, with a death notice at the top of His cross. (John 19:19) Gentiles both, in fearful symmetry, doing reverence to Him by naming Him what He is.

The mummy in a manger. Worshiped by eastern sages, declared by agents of the Roman Emperor, bringing to Him the wealth of the nations. And by so doing declaring Him to the world as God the Son’s royal prayer to His Father that saves you by His death.

And that is how this baby becomes food for you: by death; by His hanging on a cross which declared Him the King of the Jews; a cruel and painful throne; His blood was spilt for your drinking and His body prepared for your eating; by altars like this where He comes enthroned and lifted up by we who here praise Him, kneel before Him, and reverence Him; that body and blood first lifted on a cross are given as food so that he or she who eats it in faith may have life, life to the full. Life through this mummy in the manger.

The star appeared. (Matt. 2:2) The star made it known. (Ps. 19:1-4) The star which could be seen by all the earth led them to Him. God does not usually work this way. This was a one off. Despite the fact that you may feel close to God in nature, nature does not reveal God to you! It didn’t even reveal God to the Wise Men. Nature led them to ponder God. Just as nature’s majesty leads our hearts and minds to ponder God’s brilliant design in all things (Rom. 1:19-20), leading us to inquire of Him, but where do we find Him? Those Wise Men went to the source: not to Jerusalem, but the Scriptures. (Matt. 2:4-6)

For if you wish to draw close to the true God, who came as a mummy in a manger to feed you the bread of life, you will not find Him in nature, but only in God’s Holy Word. (John 1:1, 14) That is where the Wise Men looked. That is where even wicked King Herod had to turn in order to search out the child to destroy Him: God’s Word. It is the revealer of all things, laying bare the state of your heart, your need for God, the emptiness within of worshipping nature, or the work of your hands, or your own efforts to be wise. For none of it matters in the end. ‘“Meaningless, meaningless!” says the teacher.’ (Eccl. 1:2) God’s Word reveals human wisdom as the shallow sham that it is. It shows our need for a saviour. It shows our need for a saviour,. For the fear of the Lord is the beginning of wisdom. (Prov. 9:10) Fear inspired by knowledge of your sin before your All Wise Creator, who in wisdom sent His Passover Lamb to passover your sin. (John 1:29)

The Star appeared leading the Wise Men to the Christ child. But God’s Word appeared in the flesh (John 1:14) letting them do reverence to Him, placing their faith in Him, leading you and me to Himself, giving Himself to mankind so that your hands can touch God, your mouth can taste Him and your eyes can see Him and know that He is good. (Ps. 34:8) This makes no human sense. A God born in the weakness of flesh? The Infinite being encapsulated in what is so finite? The All Powerful, Almighty helpless as a newborn? The All Wise, All Knowing One having to learn everything according to the flesh as a baby boy? Ridiculous!

And yet the Magi, the Wise Men of Persia—those who were considered the fathers and teachers of the Ancient Greek Philosophers, Greece who taught Rome who imparted to the West our great traditions of wisdom and scientific progress—these men come and bow before this illogical God. This God who comes to His people in weakness, allowing Himself to be ignored, rejected. A God who teaches us to be shrewd like serpents, but meek as doves. (Matt. 10:16) A God who allows Himself to be killed so that He might save you by His death and become the Eternal Interceder with His Father on your behalf.

This is the God who shepherds His people by His preached Word, by His shed blood received with His promise here, and by water and His Word poured on the heads of infants and old, wise and foolish alike!

This epiphany, let the Star lead you back to the mummy in the manger so that God’s Word might go with you all the year as you receive Him regularly in His Holy Supper. 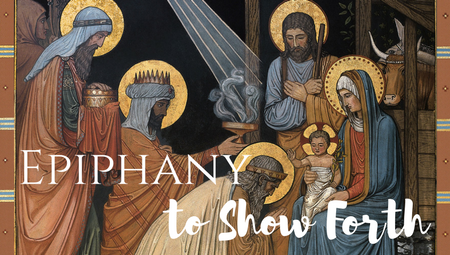 Listen to Him—The Transfiguration of Our Lord

Epiphany Face—2nd Sunday after the Epiphany

The Baptism of Our Lord